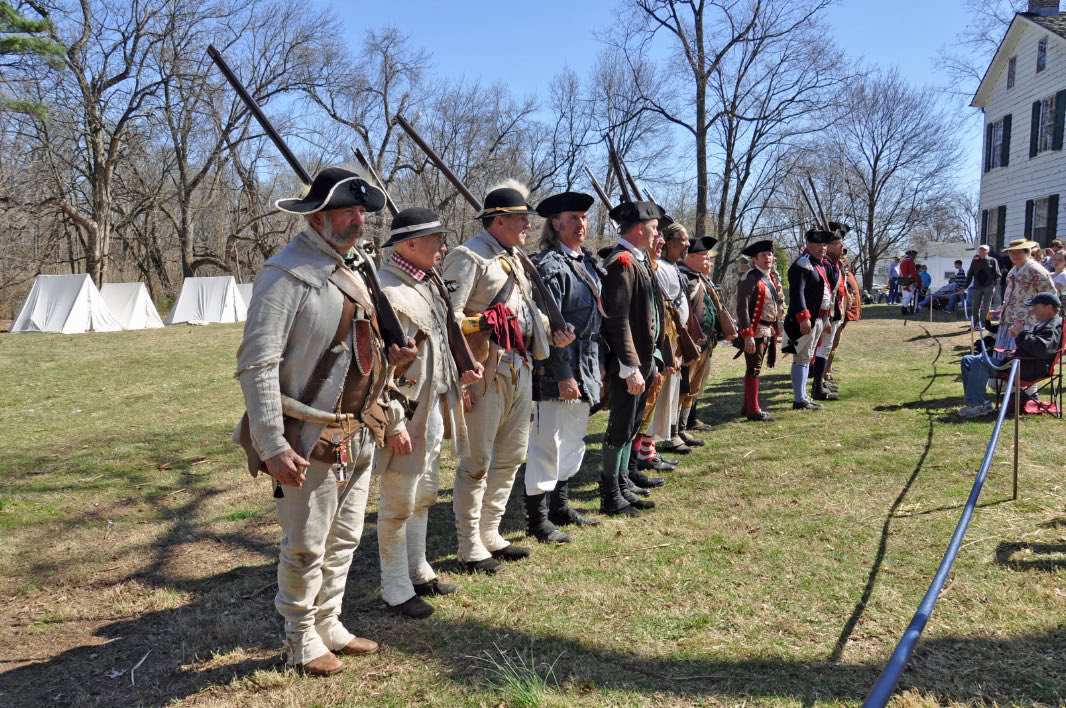 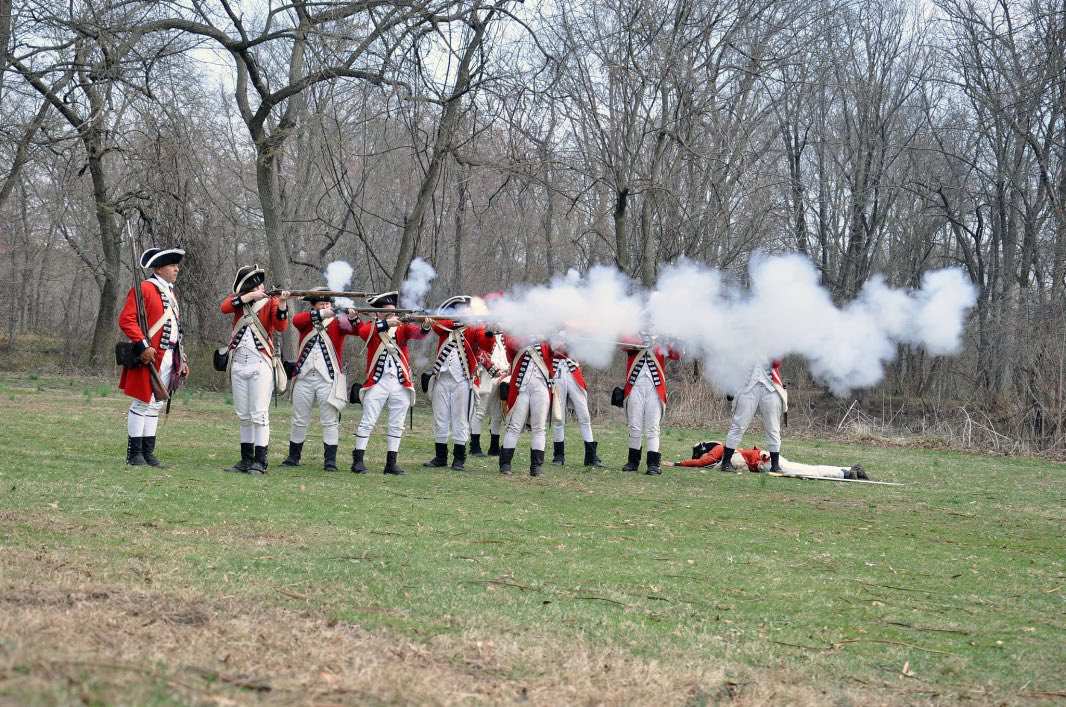 245th Commemoration of The BATTLE of BOUND BROOK~2022

“The American Revolution ~ Living History at the Abraham Staats House”

About the Battle of Bound Brook 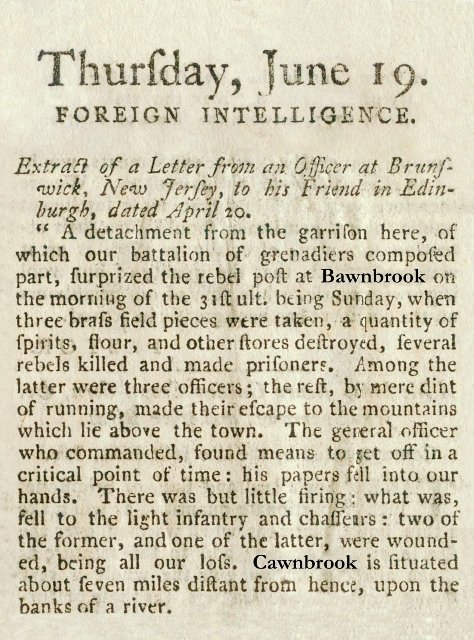 On Sunday, April 13, 1777, a four-column force of 4,000 British Crown troops led by Lord Charles Cornwallis attacked a small American garrison of about 500 commanded by General Benjamin Lincoln and located in the town of Bound Brook. The objective: surround the town, capture the garrison and provisions located at this patriot stronghold and gain a foothold in the war against the American Revolutionary army. In the surprise attack, an advance column led by Hessian Jaeger scouts fighting for the British were pinned down by Colonial soldiers who put up a spirited resistance at the Old Stone Arch Bridge located near the Queens’ Bridge.

The skirmish bought precious time for the bulk of the American force in Bound Brook as British forces poured into the area. When a second column of 1,000 British soldiers charged over the Queen’s Bridge to attack, the Colonials retreated, escaping the trap. The American army regrouped in the area later in 1777, in a larger encampment called First Middlebrook.

General George Washington’s army was also settled in the winter and spring of 1778-79 in a Second Middlebrook lengthier stay, during a cantonment in the area of Bound Brook. Nearly 10,000 troops gathered at Middlebrook, with attendant artillery camps, hospitals, commissaries, post office, artificers, quartermasters’ stores, corrals and other military operations situated in nearby locations ranging from present-day Manville up into the area of the Pluckemein hills. General Washington and many of his officers stayed in homes in the area, near to the main encampment. General Baron Frederich von Steuben made his headquarters at the home of Abraham Staats in South Bound Brook ~ today known as the Abraham Staats House. 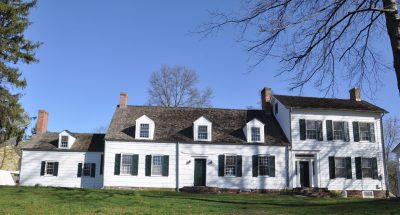 During the American Revolution, the house was owned by American patriot Abraham Staats, marked as an enemy of the Crown by the British. His family hosted General Baron von Steuben, drillmaster of the American Revolutionary Army, who used the house as headquarters during the Second Middlebrook encampment in the winter of 1778-79. Research indicates the earliest portion of the house dates from around 1738, with sections added around 1800 and 1840 by the Staats family, which owned the home for 200 years. Following the Battle of Bound Brook in April 1777, a retreating British column crossed the Staats’ property, taking items which Abraham later made claim as war damages. The home was the setting for visits by General George Washington and other key figures during the War. The Abraham Staats House was purchased by the Borough of South Bound Brook in 1999 for historic preservation. The South Bound Brook Historic Preservation Advisory Commission and Friends of Abraham Staats House, Inc. are dedicated to preservation of the house, which has been placed on both the State and National Register of Historic Places.

Life in Camp
Encampment at The Abraham Staats House 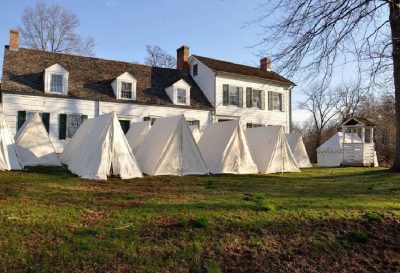 The soldiers and camp followers will be living life in camp much as it would have been in 1777. Visitors may tour the camp, observe camp artifacts and equipment, and see how the troops of the American Revolution, British Crown and American forces, lived and view Camp Food Preparation, Military Training and Drills, Artillery and Small Arms Practice. Members of the reenactor’s units involved in the encampment are dedicated to recreating the history of the American colonial 18th century period through demonstrations, exhibits, lectures, encampments, and interpretations. Equipment used and clothing worn by members is authentic and documented. The men, women, and children who participate volunteer their time to recreate the lives of everyday people struggling for independence during the American Revolution. Members are encouraged to learn 18th century skills and strive for authenticity in their interpretations.

This triple-arch bridge is one of the oldest surviving stone bridges in New Jersey and a rare example of colonial highway engineering. Construction of the bridge was authorized by the Legislature in 1730. It was probably built soon thereafter to span the Green Brook, a channel of the Bound Brook, and form part of a causeway that crossed a large area of marshy ground along the Bound Brook and Raritan River. The bridge played a significant role in the defense of Bound Brook during the Revolutionary War, and it is one of the few existing battlefield resources in New Jersey for which a first-hand action account exists. The diary of Hessian officer Johann von Ewald records the fighting along the causeway during the Battle of Bound Brook in April 1777. Made of locally quarried rough sandstone and shale, the bridge spans the boundary between Somerset and Middlesex counties and the boroughs of Bound Brook and Middlesex. Approximately 85 feet long and 33 feet wide, its remains are almost completely buried by fill on its north side; on the south side they are exposed above the top of the arches, including two large buttresses, one of which is relatively intact.
(Excerpt from Preservation New Jersey.)

This two acre site, the first established cemetery of the Bound Brook Presbyterian Church, was active as a burial ground between about 1725 and 1900. Between 1,000 and 1,500 people may have been laid to rest in marked or unmarked graves. Verified information exists for about 670 decedents, including forty Revolutionary War soldiers (two were Loyalists), as well as soldiers who served in the French and Indian War, the Whiskey Rebellion of Pennsylvania, the Mexican War and the Civil War. Dr. William McKissack, a captain in the Revolutionary War and a founder of the Grand Lodge of Free and Accepted Masons for the State of New Jersey, is perhaps the most widely known individual buried in the graveyard.