History of the Abraham Staats House

The Staats Come to New Jersey: The Evolution of a Home

Hendrick Staats Two Room House: The story of the future Abraham Staats house begins with Hendrick Staats. It is believed that Hendrick built the initial two room house shortly after he and his new wife took possession in 1740. It was a small house, roughly 20’ x 28’ and following Dutch tradition, it was two rooms deep with the front room significantly larger than the back room. A narrow stairway in the back room gave access to the garret, an open storage space. By 1745 Hendrick Staats paid 9s.4d. taxes on his 250-acre Franklin township farm and had a reasonably large herd of 10 cattle.[5] That same year his son was baptized at the Harlingen church and he received his certification as a member in 1746.[6] Hendrick and his family remained on their Franklin farm for the next two decades.

Figure 2: Plan for Hendrick Staats 1740s House. Hendrick’s roughly 20’ x 28’ structure consisted of two rooms laid out front to back with a significantly larger front room. Only the front room was heated and a small enclosed staircase in the back room provided access to the open garret space above. HSR

Abraham and Margaret Staats c. 1770 Expansion: For unknown reasons, Hendrick Staats sold his Bound Brook farm to his younger brother John on April 5, 1769. John Staats paid Hendrick and Maghtel £1,450 for the 272-acre farm.[8] A year and a half later, on November 8, 1770, Abraham Staats married Margaret Du Bois. John Staats gave Hendrick’s farm to Abraham and Margaret shortly after their marriage and they began making significant changes to their new home. It should be noted that while Abraham and Margaret lived and worked Hendrick’s farm, actual ownership remained with John Staats. Abraham could not claim to be a freeholder of the Town of Franklin until he became the actual owner, something that would not occur until John’s death in 1781.

Figure 3: Plan for Abraham Staats’ 1770s House. Abraham and Margaret expanded Hendrick’s two room house and introduced stylish interior elements appropriate to the 1770s. They enlarged the building, adding roughly 6’ to the west side. At the same time they made the two original rooms slightly smaller by moving the now interior west wall roughly 3’ to the east. The end result was a four-room house with a side hall on the west side. The Kitchen Building remained an independent structure. [HSR, IV: 17-18] Not to scale.

Abraham and Margaret enlarged their new home, turning Hendrick’s two room house into a four-room house with a stair hall on the west and living spaces to the east. They slightly decreased the size of the two original rooms and installed corner fireplaces in each of the east rooms. For the first time both the front and back living spaces on the east side had heat. The original stair leading to the garret was removed from the back room and installed in the new stair hall. The small space behind the stair hall probably became a fourth room.

The Mysterious Kitchen Wing: The kitchen wing of the house is a mystery in many ways. To date little solid information is available on the kitchen wing which will ultimately be integrated into Abraham’s house in the first quarter of the 19th century. It appears to have been an early structure, possibly the earliest structure on the site. It is also possible that it was moved to its current location. Family tradition indicates that there may have been a kitchen on the east side of the house prior to the construction of the East Addition; the discovery of the foundation for a fireplace under the Addition provides some evidence of such a building. It may predate the construction of Hendrick’s two room house. At this Kitchen wing
point it is speculative to make any definitive statement regarding the origins of this building.

The Kitchen Wing appears to have been a free-standing building on the Staats property. Its H-bent construction follows the Dutch tradition as does the distinct possibility that the fireplace was originally a Dutch style jambless fireplace. A trove of bricks discovered next to the fireplace by Dr. Richard Veit during his archaelogical investigations strongly hints at both a jambless fireplace and an original bake oven along the west wall. It may have been the first building on the Staats family farm. Drawing based on discussion in Historic Structures Architects, Historic Structure Report for the Abraham Staats House, Trenton, NJ, 2002, IV: 18-19. Not to scale.

Abraham and Margaret Staats c. 1800 Expansion: The four-room home where Abraham and Margaret began married life seemed increasingly cramped, physically and socially. By 1800 the family numbered two adults and six children, four daughters in their mid-teens and twenties as well as two younger children. In addition, Abraham owned an unknown number of slaves, but presumably one or two at this point. To accommodate a growing household it is likely that all the first floor rooms, except for the stair hall, contained beds.[17] Some of the children may have slept in the garret. The small house also failed to properly represent the growing social and economic position of the Staats in post war Somerset County. The addition of two new first floor rooms, a large parlor in the front and a bedroom in the rear gave the Staats family a home that more accurately reflected their enhanced position in the community. It allowed the family to more clearly delineate public/living spaces, the two front rooms, from private spaces in the back and on the second floor. The new front room had a smaller, federal style fireplace with pilasters and an oval shaped frieze, typical of the period 1790-1815. Once again, the back room was unheated.

Isaac Staats Expansion, the 1820s, Creating a Second Household: Isaac Staats is generally credited with the final major expansion of the family homestead. In 1823 Isaac and his sisters formally split the farmlands. Isaac’s half of the farm included the homestead lot. Once the land was legally divided Isaac took some of his inheritance and expanded the old homestead, essentially creating two separate households. It is possible that the sisters contributed money toward the construction of the East Addition. It would have been to their benefit to have the original house clearly under their control while Isaac and his family claimed the newly constructed East Addition.
The new wing included a first floor with a fashionable entry hall, one large room at the front of the house and one or two smaller back rooms which may have served as a kitchen or other work space. The large front room had a fireplace. The second floor contained the stair hall, a small bedroom and the large heated front bedroom.

Isaac Staats Second Expansion, c. 1835-1840: It is during the midst of these changes that Isaac further expanded his East Addition, possibly using funds he acquired selling a section of land to the east of the house. He sold 28 acres of land to the Delaware and Raritan Canal Company for $1,903.50 on December 10, 1834. It is generally assumed that he used at least part of this money to increase his living space by enlarging the two back rooms and replacing the original leanto roofline with a full second story, creating additional bedrooms and storage on the second floor and garret. He also installed a single-story addition to the northeast corner. This probably served as the kitchen for Isaac’s family.[25]

Figure 6: Isaac’s second addition increased the size of the back of the house allowing a clearer separation of work spaces, largely the domain of the slaves, and family spaces up front. He also added several upstairs bedrooms. The exact layout of the first floor of the addition has not been determined due to later changes. Not to scale.

Changes credited to the LaTourettes: The LaTourettes, made some alterations to the Staats homestead during the late 19th and early 20th centuries. The 18th century kitchen originally had a door in the center front as well as one on the west end, by the fireplace. Eugene and Florence removed the door on the front of the kitchen. Photograph 2, dating to the 1880s, shows the Kitchen Wing with a door centered between two windows. Photograph 3, dating to the 1890s, shows the door has been removed and new windows installed.

A porch along the front of the East Addition could have been added by Isaac Staats, or it may have been an added by Cornelius LaTourette. Porches were common additions to mid-19th century farmhouses, making its origins problematic. The LaTourettes obviously utilized the space, adding an awning and chairs, visible in Photograph 4. One other major change altered the configuration of the back room of Abraham and Margaret Dubois Staats 1770s house. Either Cornelius or Eugene installed a large bay window in the north wall and are generally credited with the removal of the west wall which separated the room back of the Dwelling Room from the Room back of the Entry Hall. The result was one long, narrow room. The LaTourettes would use the enlarged space as their dining room.

Photograph: 2. This c. 1880 photograph shows the front facade before the LaTourettes replaced the small dormers with large shed dormers. It also shows the door to the Kitchen Wing in its original location, on the front of the house. Cornelius LaTourette, Florence LaTourette and son Eugene LaTourette lived in the house in 1880. Rutgers Special New Jersey Collection. 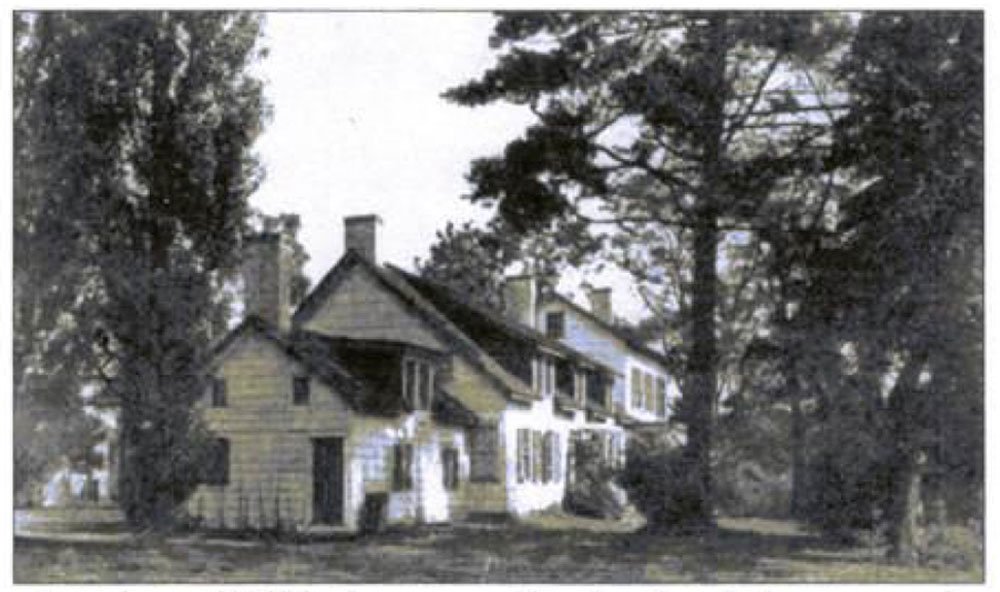 Photograph: 3 The Staats House as it appeared in Our Home Magazine, 1890. The door into the 18th century Kitchen Wing is clearly on the end of the house. New shed dormers have been added, bringing much needed natural light to the 18th century portion of the house. William A. Schleicher and Susan J. Winter, Somerset County Crossroads of the American Revolution, [Images of America], Chicago, IL: Arcadia Publishing, 1999, p. 90. 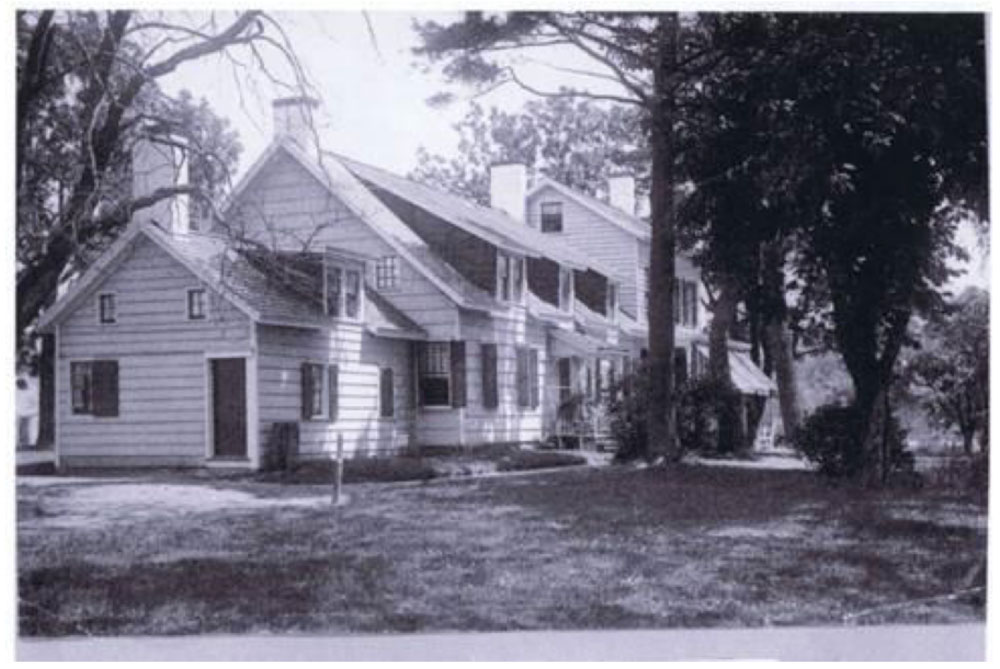 Photograph: 4 This c. 1920 photograph shows the shed dormers still in place. Note the porch along the front of the East Addition, complete with summer awning, and the small portico or pergola by the original 18th century Entry. The c. 1880 photograph showed a small portico in place, this appears to be a replacement. This photograph depicts the house as it appeared when it passed out of the Staats family in 1935. Rutgers Special New Jersey Collection.