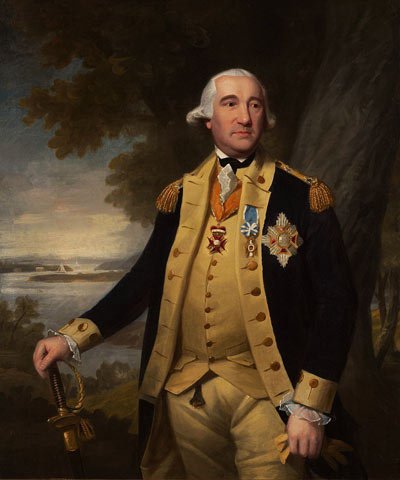 During the Middlebrook Cantonment of 1778-79, when Gen. George Washington wintered the bulk of the American troops in the area then known as Middlebrook, he and several of his generals used local homes as military headquarters during the army’s stay in the area. The Staats’ home served as headquarters for Gen. Baron von Steuben, from March 1779 to June 1779.

Friedrich Wilhelm August Heinrich Ferdinand Steuben, (b. Sept. 17, 1730 – d. Nov. 28, 1794) also referred to as Baron von Steuben, served as Inspector General and a Major General of the Continental Army during the American Revolutionary War, as well as George Washington’s chief of staff during the close of the war.

His early experience as a Prussian officer and aide de camp for Frederick the Great prepared him for his role in the somewhat ragtag and inexperienced American army, in which he introduced efficient and practical military discipline, both at camp and on the field, holding drills and tactics by training a model drill company who in turn trained other units. He authored a guide, called “Regulations for the Order and Discipline of the Troops of the United States,” that was published in 1779. The “Blue Book,” as it became known, served as the official U.S. military guide until 1812.

During his stay at the Staats’ home in the spring of 1779, von Steuben continued his training and drilling of the troops, begun the year before at Valley Forge. In early May, he hosted a special review and drill of his model troops for a visiting French ambassador, M. Conrad Alexander Girard, also attended by a visiting Spanish agent, Don Juan de Miralles. Gen. Washington and some sixty American military officers and their spouses and guests also viewed the exercise, which was followed by a meal on the Staats property. Von Steuben noted in his diary: “During my stay in Philadelphia I became very intimate with M. Girard, the French Minister, whose departure for Europe I very much regret. He honored me with a visit to camp where he came expressly for that purpose. He was received with all the honors of an ambassador. On the day after his arrival I ordered a maneuvere with eight regiments of infantry and sixteen guns. After the military display he in company with the commander in chief and all the other generals and colonels more than sixty person partook of a dinner at my headquarters.”

A Staats family account recalls the memory of the event: “Aunt Phebe, then a small child is said to have been playing with the [toy] coach and horses …when she sat on Mrs. Washington’s lap, and the baby Catherine was kissed by General Washington. A grim family joke, remembered by Aunt Jane Bonney was to the effect that the honor was too much the child, who died the next fall.” (From a family account, “The LaTourette Staats House,” by Elizabeth Porter Wyckoff, 1929), Abraham and Margaret’s daughter Catherine, born in 1778, died Sept. 2, 1779. Daughter Phebe, born in 1775, just four years old at the time of von Steuben’s stay, lived through adulthood at the house, where she died in 1863.

Following his departure from the Staats’ home on June 19, 1779, von Steuben went on to continue his influential role in the American army during the war, during the campaign in the South and the final phase of the war culminating at Yorktown. He assisted Washington in the aftermath of the war, helping to demobilize the army and planning for the new nation’s ongoing defense. He was discharged with honor on March 24, 1784.

For additional details of Baron von Steuben, and his life in America following his military career, please read this Wikipedia page.